Meilee loves to draw. I had looked into a summer art camp, but the cost and transportation were issues. It occurred to me that I know a few artists and it would make sense to introduce Meilee to them, let her ask questions, and see their art. At work, I learned that meeting a scientist has a positive impact on whether a child considers becoming a scientist. I don’t see why that wouldn’t apply to any type of professional. So I decided to DIY some art “classes” for Meilee.

I first met Gina Tolentino in 2003 when she started dating Jerry Corso, a friend who was a chef at one of my favorite restaurants at the time. I remember how Jerry described Gina when he mentioned that he was going out with her: “She’s gorgeous.” (They’re now married.) I think Gina’s art is gorgeous: richly colored fantasy worlds. I arranged for a visit to Gina’s studio at the Georgetown Arts & Cultural Center. 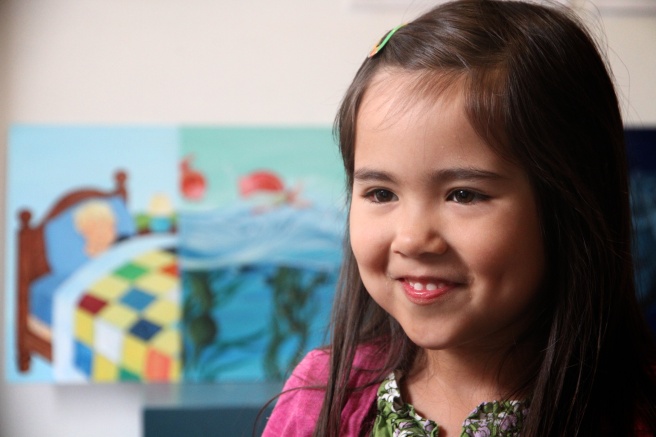 Meilee delighted in the art that surrounded her, especially the painting of a snail that’s the subject of a children’s book that Gina is illustrating “A Whale Who Dreamt of a Snail.” Gina was kind to look through some of Meilee’s drawings and offer some encouraging words.

I prompted Meilee to ask questions. “I have trouble drawing in the lines,” she said. Gina responded that it indeed is hard to draw within the lines, but that it takes practice to improve. One trick, she added, is to draw a second line to help broaden the border. Then she showed Meilee an example of how it’s also possible to cover up a “mistake.”

Gina also showed us one of her larger works, a three-panel underwater scene that includes jellyfish with faces and a shimmering mermaid.

Another great piece of advice that Gina shared was that it’s helpful for an artist to keep a notebook of inspirations. Gina has a binder of magazine clippings. She showed Meilee a picture of a shiny couture dress and explained that when she sees a dress like this she asks herself how she would approach painting the shimmer of the fabric. 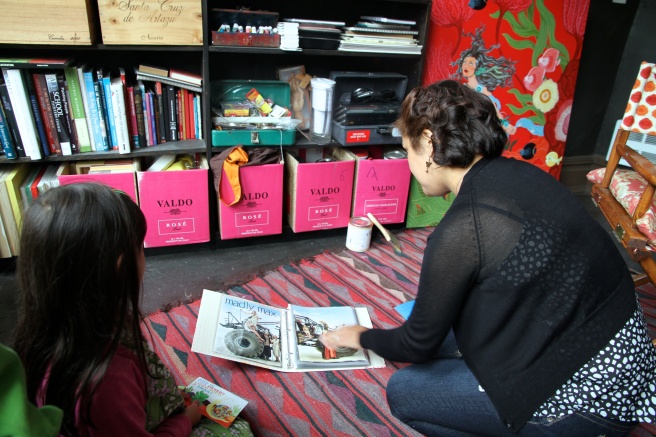 At the end of our visit, Gina invited Meilee to return so that they can draw together. What a great opportunity!